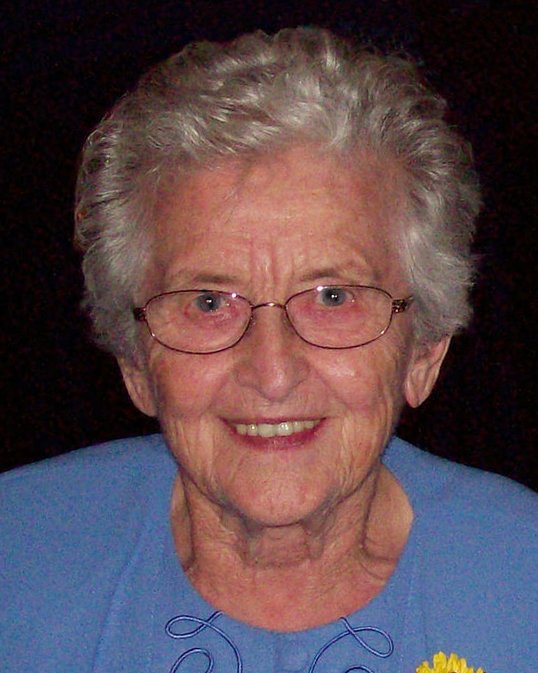 Mom was born on January 7th, 1929 to Peter and Agnes Brandt in the RM of Morris.  All of her childhood and young adult years were spent on their family farm near McTavish, MB together with her four brothers and five sisters.  A story we remember her telling us was about catching gophers with her brother Eddie.  In our young minds that sounded like quite a feat.  Like most students of that time, she walked to school every day but in her case, that involved just a short walk across the road to Clover Plains school.  She completed Grade 8 and in later years often spoke of her desire to continue beyond that but further education was not an option as she was needed to assist with chores at home and on the farm.

Mom and Dad first took notice of each other during the 1950 flood.  Sometime after, they had their first date which was a trip to St. Jean for ice-cream.  This was followed by a second date some time later.  One of their dates included a trip to Assiniboine Park in Winnipeg (which maybe explains why that was their favourite destination for Sunday afternoon family picnics).  After a short courtship (with relatively few dates), Mom and Dad were married on September 28th, 1952.  Married life meant a huge move for them, far from familiar surroundings of Riverside and Rosenort to the far western edges of the community, six miles to the west.  There they settled on the farm that became their home for the next 46 years, the place where we, their four sons, grew up.  As was the case for many farmers, their early years included off-farm work for Dad.  This included packing up the whole family for several winters and moving to Vermillion Bay and Kenora, ON.  Mom never complained about these annual upheavals, which sometimes included new babies.  In later years her stories always made this sound like an adventure.

Through the years that followed, most of Mom’s activities centered around working together with Dad in daily farm tasks, caring for their four sons and being involved in activities at Pleasant Valley EMC, which for the past 57 years was their church, which was located two miles from their farm.  Although to us boys, life on the farm might have seemed to include mostly work which ranged from weeding the garden, mowing grass to feeding pigs, Mom had a way seeing the special things in ordinary life.  One of these activities was keeping a chart where she kept track of the first bird of each species as they arrived in spring and noting which family member had spotted it first.  Her special joy was her flowers and each year it seemed that her flower garden expanded.  Her efforts finally received proper recognition and appreciation when daughters-in-law entered the Friesen household (relieving Dad and us boys of those duties).  As we grew older we also grew in our appreciation of Mom’s enthusiasm for her flowers.

Mom’s sense of adventure really came alive when it came to traveling.  She would tell us stories of what the Rocky Mountains looked like and she dreamt of the day when our family could experience those sights first hand.  That dream finally came true for our family for the first time in 1969 and it truly was a family project.  While Dad worked at completing farm jobs before the trip, the rest of us worked off the farm at painting projects and hoeing sugar beets until we had raised enough money to get us to BC and back…the vast sum of $330!  We rented a small tent trailer and headed off on a ten day vacation that included many unexpected adventures along the way.  In looking back, Mom would to this day have named that as a family highlight.  In later years, she and Dad were able travel to Newfoundland, Alaska and many points in the US.  This included volunteering for several weeks each winter over the course of five years at Wycliffe Bible Translators in Texas.  Here they used their practical skills in construction and sewing to assist missionaries while also making many new friends.

Mom spent many hours at her sewing machine.  This was both a labour of love and of necessity.  Virtually all of the clothes we wore were the result of Mom spending many hours at her sewing machine in order to keep her family properly clothed.  Few projects were too challenging for Mom to take on.  This ranged from sewing motorcycle jackets to wedding dresses, including those for two of her daughters-in-law.  She saw her gift of sewing as a ministry and many people benefited from that. This included many quilting projects that ended up going to needy people overseas.  A special project of Mom’s over the past twenty-five years has been sewing quilts for each of her children and grandchildren, which became treasured possessions in our various homes.

Mom had an ability to adapt and embrace change until the end of her life.  This included retiring off the farm in 1997 and moving into the town of Rosenort.   In 2012 when they sold their house and moved into a seniors’ housing complex, Mom again made the change with enthusiasm and she thrived in this new environment, where socializing meant a short walk down the hallway to participate in doing crossword puzzles or playing Skip-Bo.  She made many new friends very quickly.

Mom’s biggest change came in 2013 when she had to say good-bye to Dad, shortly before their 61st wedding anniversary.  She met this change courageously and without complaint.  She spoke of Dad continually, always with the complete confidence of being re-united with him.  She used her loss to minister to others facing similar losses, encouraging them during their difficult times.  In the past week we learned that she had made a practice of each day praying for a widow in the community.

This approach to life was rooted in her firm faith that Jesus walked beside her each day, in whatever circumstances that day might bring.  This was a faith that had been passed down to her by her parents, a faith that she made her own at the age of nineteen.  It was this faith that carried her through as she lived the past five years without Dad at her side.  The faith was evident in those final conversations she had with family and friends just two weeks ago.  Mom passed away on December 29th and we know that her 90th birthday on January 7th will be her best one ever!

Mom also leaves one brother and four sisters and their families along with many nephews and nieces.

She is survived by her four sons: Glenn (Sue), Brian (Luella), Terry (Sheila) and Randall (Karen), eight grandchildren and 13 great grandchildren.  Helen was predeceased by her husband Bill S. Friesen, three brothers and one sister.

Donations in memory of Helen may be made to Pleasant Valley Evangelical Mennonite Church.

Share Your Memory of
Helen
Upload Your Memory View All Memories
Be the first to upload a memory!
Share A Memory