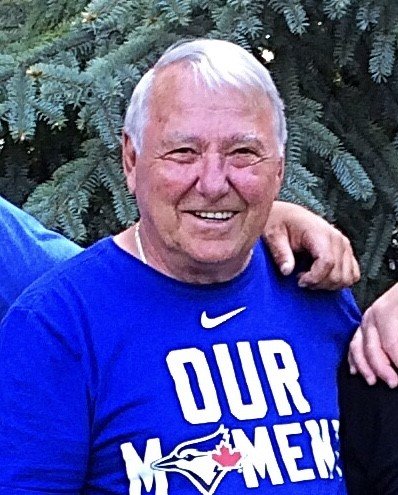 Please share a memory of David to include in a keepsake book for family and friends.
View Tribute Book

The 3rd of 4 children, Gerry was born to a farming family of Redvers SK on April 1st, 1946. Growing up on a farm instilled in him the values of hard work, team work and leadership. After graduating from Redvers School, Gerry began his career with MTS, soon acquiring the position of Manager and then Regional Manager before retiring at the age of 50.

Soon after, his career brought him to Morris where he met the love of his life Susan. Shortly after marrying, they began the great task of building their family home and establishing deep roots with a strong foundation within the community. Gerry will be remembered as a father who dedicated his time to his family and friends. Whether it be volunteering his time coaching countless hockey teams, baseball teams or volunteering as Parade Marshall with the MB Stampede, it was clear he did so with commitment and devotion. Gerry was instrumental in the lives of his boys.

Gerry’s sense of humor often made him the life of the party. Never would someone be around him and not feel included and welcomed as Gerry would be the first to offer a drink and tell them a joke.

Gerry did not stay retired long – he accepted his position as manager and later consultant with an engineering firm in Toronto, ON, finishing his career in Western Canada. Gerry’s (true) retirement years were spent alongside his wife Susan. His favourite pastimes included gardening in his wife’s flowerbeds, working on Susan’s many projects (ponds), watching his grandchildren play various sports and spending time with them, following his favourite sports teams and being with family. Gerry could always be seen with a smile on his face and always had a good story to tell.

Gerry was predeceased by his beloved parents, Andy and Dorothy Lamotte.

The family would like to thank doctors and staff for showing Gerry and his family unwavering support, dedication and compassion during his stay. They would also like to give their heartfelt thanks to family and friends for the prayers and support extended during this difficult time.

In keeping with Gerry’s wishes, a funeral will not be held. Rather, the family asks that in memory of Gerry, you demonstrate the same love for life and welcoming approach as Gerry, and maybe even tell a joke in his honor, or lift a glass to his name. In lieu of flowers, donations can be made to a charity of your choice. Arrangements have been entrusted to Morris Funeral Home.

In our hearts you’ll always be

Until we meet again.