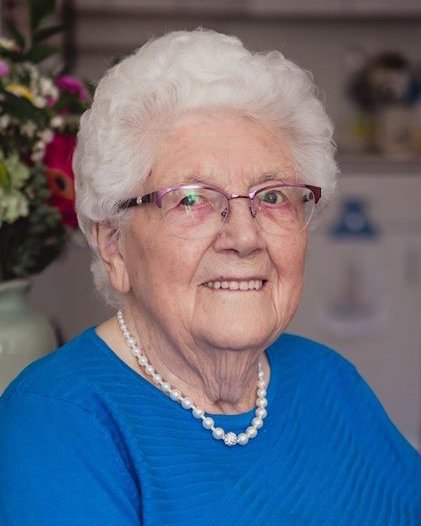 Please share a memory of Helen B. to include in a keepsake book for family and friends.
View Tribute Book

Our mother, grandmother, great-grandmother, great great-grandmother, sister, aunt, cousin, and beloved friend of many, Helen B. Loewen (nee Peters), age 98 years, of Rosenort, passed away peacefully into the presence of Jesus, her personal Lord and Saviour, on November 9, 2019 at the Morris General Hospital.  She is survived by four daughters: Elsie Dueck, Luella Giesbrecht (Jacob), Amanda Peters (Dennis), and Naomi Dueck (Lawrence); one son Paul Loewen (Melody); 14 grandchildren, 26 great grandchildren and one great great grandchild; three sisters and one brother.

Helen was predeceased by her husband, John B. Loewen, two children in infancy (Reinhard-8months and Johnny-6 months), her son-in-law (Edwin Dueck), three sisters (Mary, Tina, Susan) and one brother (Henry).

Mom (Helen) was born on March 2, 1921, in Gnadenthal, south Russia.  Two years later, political unrest and advancing persecution forced her parents to bundle up a little family (which included her infant brother Henry) to start a new life in Canada.  They settled in southern Manitoba, and, while mom often spoke of the tough economic times when she was young, she also had many fond memories of school, friends, and many cousins who lived in the southern Manitoba village of Gnadenthal.  As the oldest of 9 children, mom picked up many family responsibilities early in life, which was especially important since her mother was deaf.

As a teen and young adult she worked seasonal jobs, picking potatoes or assisting as an extra harvest hand.  She went to stay with the David Wiebe family living west of Morden, where help was needed to manage a growing family.  Later when the family moved to BC, she eventually followed them for some seasonal work on the fruit farms of the Fraser Valley.  She also took a seamstress course in Steinbach which advanced her love of sewing.  This was followed by a time at Winkler Bethel Hospital as a cook and from there to Mennonite Collegiate Institute in Gretna as head cook for two years for the boys dorm.  Feeding 70 hungry teen boys with about 60 buns and a few dozen eggs (while fighting off midnight kitchen raids by the boy’s….and sometimes rats!), pushed her to be creative with the resources she had been given.  But that was about to change when John B. Loewen, from Rosenort, sent his first letter to mom.

In spring of 1949, Dad was encouraged by Mom’s sister Susan (who was working in Rosenort at the time for Dad’s uncle) to pursue her sister Helen for courtship.  After a few letters and a couple of personal visits, Dad proposed to Mom.  She happily accepted the proposal and a few weeks later married John B. Loewen.  Life in Rosenort required some adjustments.  She learned to be a wife and mother to Elsie all at the same time.  Mixed in with that in their first year of marriage were the 1950 flood and the birth of their first child.  The accepting and loving embrace of the Siemens clan at that time was often referred to, even now in her later years.  Life on the farm was full of responsibilities, which Mom readily accepted with joy and enthusiasm.  A large strawberry field brought hard work (where we all received musical training to sing 4-part harmony), and with it came Mom’s great joy of getting to know many people in the community.  Although church was expressed in different ways that she was used to, she graciously engaged into her new faith community.  Grieving the deaths of two infant sons was always expressed to her family as the profound ways of God that we could not understand now but one day we would.  When dad took ill with Parkinson’s disease while she was in her late 40’s, she did her best to serve and live above the circumstances; and after Dad passed away, she faced loneliness with regular acts of service and blessing.

Church was an important part of her life, but far more important to her was the experience as a teen when she came to the realization that she could have a personal relationship with Jesus Christ.  “Deeper life meetings” led her to understand the need for a personal relationship with the Lord whom she chose to follow.  She was baptized on the confession of her faith when she was 20 years old and her spiritual growth was nurtured by the consistent preaching of the word and regular church events.  Her personal love and commitment to God was vivid and real, and her gratefulness for the forgiveness she found in Christ was so profound that she rarely could pray without tears streaming down her face with gratitude.

Faith was more than personal; it was also to be lived and shared.  She taught Sunday School for the ladies, attended prayer meetings, sewed quilts and blankets for the needy, and engaged in the hospitality of missionaries and cross cultural friends.  For many years, she hosted the Haitian Quartet in our home, later she (and dad) were able to visit their friends in Haiti.  Bible studies, prayer meetings, and church services were rarely missed, even until the very end.  Conversations after church often meant we were the last ones out of the building.  She would want you to know that following Jesus gave her joy, and peace, and deep meaning life.  And as her children and grandchildren know, she prayed for each one, that “not one would be lost for all eternity”.  Her prayers included the generations yet to come, the ones still unborn.

Mom moved into the Rosebay apartments in the fall of 1992 as one of the first residents.  She wanted the corner suite, and with it came sunshine, her fantastic displays of petunias, and her place of hospitality and many friendships!  She enjoyed this place for nearly 25 years, and then just over 2 years ago, she made another move within the same building to the Heritage Assisted Living Units.  As the residents and caregivers of Heritage will attest to, she became a great blessing by listening, through a word of encouragement, a hug, a fun story or joke, and frequently with prayer.  A special thanks to the Roselane, Rosebay, Riverstone and Heritage community for the wonderful kindness that you showed her, especially in her final years.

A verse of Scripture that describes her desires is from Psalm 71:14-18

“As for me, I will always have hope; I will praise you more and more.  My mouth will tell of your righteous deeds, of your saving acts, Sovereign Lord; I will proclaim your righteous deeds, yours alone.  Since my youth, God, you have taught me, and to this day I declare your marvelous deeds.  Even when I am old and grey, do not forsake me, my God, till I declare your power to the next generation, your mighty acts to all who are to come.”

The funeral service for Helen will be held Thursday, November 21, 2019 at 2:30pm at the Rosenort EMC.

The burial will take place prior to the funeral at 1:30pm at the Rosenort EMC Cemetery.

Donations in memory of Helen B. Loewen may be made to the Gideons.

Share Your Memory of
Helen B.
Upload Your Memory View All Memories
Be the first to upload a memory!
Share A Memory