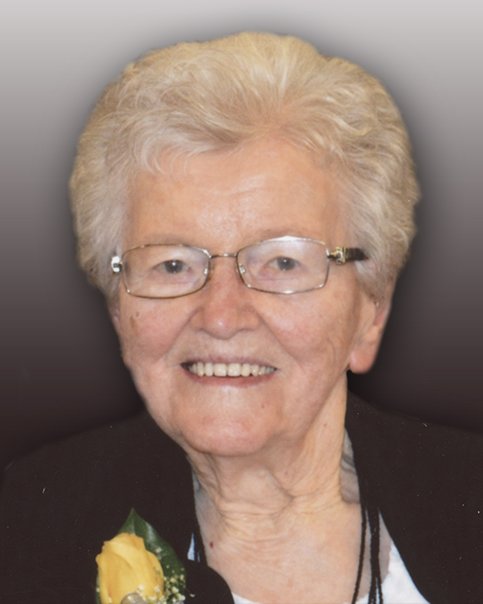 Please share a memory of Katarina to include in a keepsake book for family and friends.
View Tribute Book
Our mother, grandmother, great-grandmother and great-great-grandmother passed away Thursday, March 12, 2020 in the Morris hospital with her family by her side. She was 100 years old. Mom was predeceased by her husband Bernhard (Ben), her parents, and all except one of her 14 siblings. She is lovingly remembered by three children and their spouses: Allan (Margaret), Frank ((Marianne), and Florence (Bill); eight grandchildren and their spouses, 25 great-grandchildren, and two great-great-grandchildren. Mom was born on April 23, 1919 to Frank B. and Aganetha Kroeker in the Rosenort area, the eighth child of fifteen born to her parents. All her education up to Grade 8 was taken in Rosenort, and after that she helped in the parents’ busy household and on the farm. She committed her life to the Lord and was baptized upon confession of her faith on July 25, 1937, and was received as a member of the Evangelical Mennonite Conference. In 1968, she became a charter member of the Rosenort Fellowship Chapel to which she remained faithful till her passing. In the last few years she found it increasingly difficult to be part of the fellowship group due to decreased mobility, hearing loss and caregiver schedules. After two years of dating, she married our Dad, Bernhard D. Friesen on Sunday morning June 4, 1939. They moved into the brand new house that Dad had built in Rosenort, and then several years later, moved it to Rosenhof where they had a small mixed farm on their own. While in this home, they were blessed with their three children: Allan, Frank and Florence. When family and friends started moving to Mexico, they also agreed to move to this new place where they could worship as they felt led and also raise and teach their children as desired. This move transpired in the winter of 1949. The family’s stay in Mexico was short-lived, as in late May of 1953, Dad was diagnosed with bowel cancer, which resulted in surgery in the States and his death five days later on June 24, 1953. Thus Mom became a widow at age 34. Dad’s body was buried in Rosenort, and Mom stayed here for a few months and then returned to Mexico to sell their farm in 1955. Then she and her young family moved back to Manitoba, where she endeavored to provide for her family by painting new houses, taking care of her elderly parents, and then working at the local Eventide Home as cook for 23 years. She retired in 1989. Here she made many friends and it was an enjoyable time of her life, though it should never be underestimated how much she missed her husband of only 14 years. Mom was an excellent cook and her home-made food was always very nutritious, tasty, and enjoyed. She loved setting and serving a lovely meal for her family and friends. We have already for the past half-decade or so missed her fine cooking, though at age 99 she showed us she could still bake an excellent Saskatoon pie, which she of course promptly shared. Many spare hours were spent knitting, crocheting, quilting, reading, etc. Her children and grandchildren have all benefitted from her many beautiful creations. Mom loved to play card games such Skipbo, Flinch, and Phase 8, and never missed a chance to beat other players. She played Skipbo in the hospital as late as two weeks before she passed away. She did have a bad fall in June 2007 where she dislocated her shoulder. Her right hand and her range of motion in that arm were never the same again. Except for a gall bladder operation, her health over the years was always good except for the usual colds, flu and the likes. Over the years she has taken very few prescription drugs even to the time of her home-going; a little bit of pain pills and vitamins was about all she took. That may explain why she lived so long. Mom was a typical Kroeker in that she was particular in how she dressed and how she presented herself. It was a special treat for her to shop and go for coffee. Mom enjoyed spending time with her family. Mom was quiet by nature but we always knew she loved and cared for us deeply, and we were always in her prayers. Her bright smiles will be missed. A private family service will be held at the Rosenort Fellowship Chapel. The burial will take place at the Rosenort EMC Cemetery. Donations in memory of Tena Friesen may be made to the EMC Missions (Evangelical Mennonite Conference, 440 Main St, Steinbach, Manitoba, R5G 1Z5) We love you Mom. Rest in peace.

Share Your Memory of
Katarina
Upload Your Memory View All Memories
Be the first to upload a memory!
Share A Memory