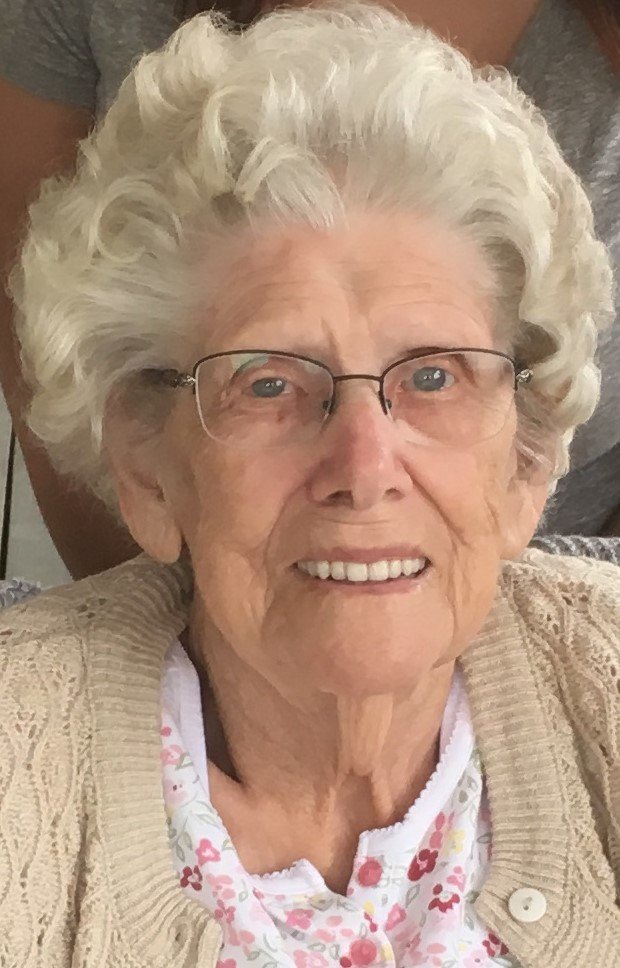 Please share a memory of Helen to include in a keepsake book for family and friends.
View Tribute Book
It is with great sadness that we announce the sudden passing of our Mother, Grandmother and Great-Grandmother Helen Brown on Monday, August 2, 2021 at the Red River Valley Lodge in Morris, Manitoba. Left to cherish her memory are her six children Terry (GuiLi), Ken, Janice Hall (James), Lori, Randall (Karen), and Curtis (Kelly); and 11 grandchildren Michelle, Ian (Dawn), Kimberly (Dan), Allison (Travis), Lou Yan, Stephen, Bradley (Mandy), Christopher, Ashley, Jordan (Melissa) and Alyssa; and 10 great grandchildren Corinna, Nathan, Alexis, Hailey, Elle, Zach, Owen, Mara, Carter and Taylor. She is also survived by 3 sisters and 2 brothers and their families; Evelyn Hunter, Nettie Brunet (Adrien), Cathy McKelvey, George Rempel (Lesley) and Jim Rempel. Helen was predeceased by her husband David Brown (1968), her parents Bernard and Eva (nee Dyck) Rempel as well as brothers Jake, John, Benny and Henry David and sisters Justina and Jeanette. Helen was born on August 12, 1926 in the Lowe Farm area. As the oldest child of 12 children Helen worked hard to support her parents and her siblings. She would chop and gather wood for the wood burning stove; assist with cooking, childcare and other household chores. She completed her Grade 8 education and would have liked to have continued with her studies as she enjoyed school and learning. Before getting married, she worked at the Lowe Farm Co-op store. A few years later she met her future husband David Brown and in April 1949 they married at Old St Andrews. Since David worked on construction projects in various provinces, for the first few years of their marriage they moved many times and sometimes lived in camps in a tent. After several years of construction life, they settled down in Lowe Farm and were blessed with 6 children. In 1968 David passed away and Helen became the sole provider and parent for their children. In addition to raising her children, she worked for Canada Post as a Post Mistress for Lowe Farm and tried her hand at owning a fabric shop. After several years, she closed the business and took a course to become a nurse’s aid at the newly built Red River Valley Lodge in Morris which required her to learn to drive and to obtain a driver’s license. Helen always had a project on the go. She was a skilled seamstress and would sew clothes for the children. She also knit and crocheted mittens, scarves, afghans, sweaters and other items she could find patterns for. She also took courses in cake decorating and ceramics and always enjoyed the challenge of trying a new craft. She often mentioned that she would like to learn to paint and although she didn’t try this, we are sure she would have been good at it. Helen retired from the Red River Valley Lodge at age 65 and in retirement, continued to enjoy working on many crafts and projects. She also enjoyed gardening and had a very green thumb. Under her care, plants thrived. In her yard, she was always able to attract various species of birds, specifically humming birds. The feeders were often very busy and she enjoyed watching the birds from the windows. In addition to Canadian travel, she had the opportunity to travel to China, Mexico and California. When she visited Yosemite National Park in California, she picked up a large pinecone from one of the large thousand year old redwoods. You could see by the expression on her face that she would like to take the pinecone home for a project as it was as large as 2 loaves of bread end to end. If she could have, she would have removed most of what she had packed in her suitcase to bring home this pinecone and more. When asked, she enjoyed telling others about her adventures and showing pictures. She also enjoyed getting together with other seniors in the community at the Community Centre. During a large flood crisis in the Red River Valley she was part of the “Granny Brigade” as they were affectionately called by the armed forces. The “Granny Brigade” prepared meals for approximately 300 people at day and the food operation ran 24 hours a day. She enjoyed the challenge and was thankful that she could contribute to the flood effort by preparing and serving food to the Canadian military and affected people. Helen moved to the Red River Valley Lodge in 2017 where she resided until her passing. Helen will be greatly missed by everyone who had the privilege of knowing her. She was soft spoken; not quick to anger or judgement; gentle and loving. A special thank you to the staff at the Red River Valley Lodge for the incredible care you provided to our Mother and the very kind comments you made to the family about her. The family appreciates all you have done. Viewing will be at the Morris Funeral Home, Morris on Friday, August 6th from noon to 9 pm. A grave side service will be held on Saturday, August 7 at 4:00 pm at the Lowe Farm Cemetery.

Share Your Memory of
Helen
Upload Your Memory View All Memories
Be the first to upload a memory!
Share A Memory