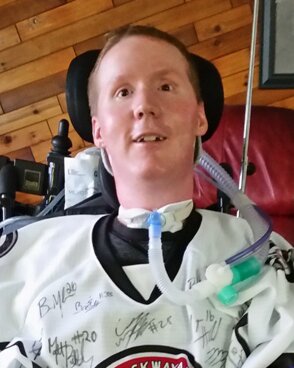 Please share a memory of Neil to include in a keepsake book for family and friends.
View Tribute Book
Neil passed away September 3rd, 2021 at the Health Sciences Centre in Winnipeg at the age of 35 years. Neil is survived by his parents Margaret and Keith Donohoe, sisters Gwen (husband Casey Oldershaw and daughter Freddie Anne) and Amanda (husband Brody Tegg and daughter Evie), and countless family and friends. Neil was predeceased by his maternal grandparents (Shirley and Bill Jonas) and paternal grandparents (Ellen and Blake Donohoe), as well as his Uncle Bob Jonas and Aunt Mary Ida Herbert (Donohoe). On August 30, 1986 at St. Anthony's Hospital in The Pas, Manitoba William Neil George Donohoe became the third child born to Margaret and Keith. He was a robust red head weighing in at 9 lbs 6 oz, and was, in every way, a perfect baby boy. He was named after his maternal grandfathers, William Jonas and George Varty, although he was always just called Neil. The using of his middle name became an unfortunate choice when spending a lifetime dealing with the medical system. At 3 months of age he was diagnosed with Duchenne Muscular Dystrophy by a researcher studying the disease in the province at the time. Though generally a genetic disorder passed on through generations, Neil's case was found to caused by a spontaneous mutation, and as such was quite unexpected. Regardless, Neil had as normal a childhood as was possible, and he grew up on a farm outside of The Pas. As a child he loved riding in the tractors and trucks out in the fields, touring the dairy barn, playing with his extensive farm toy collection, and driving his little battery cars and scooters everywhere. As he grew weaker over time he started using a scooter and later a wheelchair. Despite this, he was always busy with something, be it attending hockey games in town, going to parties with his cousins and friends, or visiting his grandparents at Clearwater Lake and in Brandon. Neil graduated from high school in 2005 in The Pas and went on to attend the University College of the North. Despite the challenges of his worsening physical condition, which left him too weak to type and unable to speak after needing a breathing tube put in, he remained tenacious. With the help of his friend and aide, Jamie Sanderson, Neil went on to complete a Bachelor of Arts degree in Sociology (with a minor in Aboriginal and Northern studies) in 2015. A true sports enthusiast, Neil was always the one to ask about the goings on of nearly any sport, with hockey being his main love. He was a regular at the OCN Blizzard games in The Pas for years, and after moving to Morris, MB in recent years he could always be found in the stands at Winnipeg Blue Bomber games and junior hockey matches all over southern Manitoba. He also loved to learn about the world and travel, and managed to get to the Bahamas and to many parts of the United States and Canada with his parents, even wheeling briefly into Mexico a few years ago. Though Neil's health issues worsened over the years, he remained involved in family affairs and was always interested in the events of the day, keeping up on current events and politics. He had a sharp wit and could be brutally funny, and was never afraid to make fun of his friends and family when opportunities arose. He didn't say much, but when he did it was always worth hearing. His presence in our lives will be sorely missed. Neil's celebration of life will be held on Saturday September 25th, 2021 at 2 PM in Morris, MB at his home. The family wishes to thank the medical staff at the Morris Hospital and the Health Sciences Centre for their care. Many thanks also to his uncle and aunt Rob and Arlene Hamblin and their family (Jeff and Heather, Laurie and Karl, and their children) for their ongoing love and support. In lieu of flowers donations may be made to Muscular Dystrophy Canada (donate online at muscle.ca), or to the Carrot Valley Community Center (PO Box 852, The Pas, MB R9A 1K8).

Share Your Memory of
Neil
Upload Your Memory View All Memories
Be the first to upload a memory!
Share A Memory