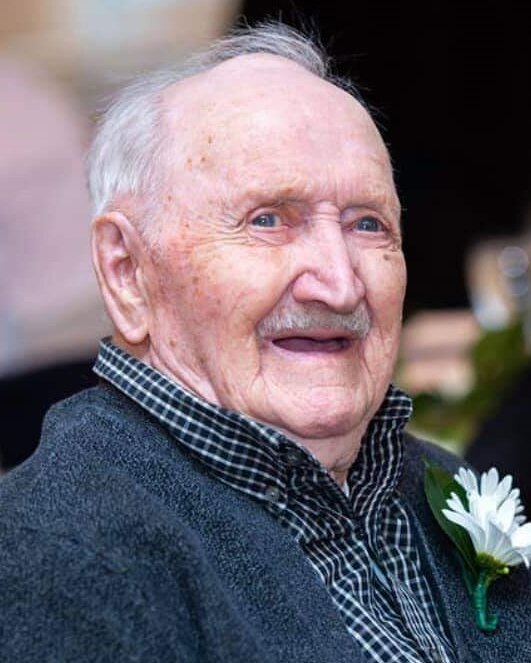 Please share a memory of John to include in a keepsake book for family and friends.
View Tribute Book
At the Red River Valley Lodge in Morris, on October 11, 2021, our most loved husband, dad, grandpa and great grandpa John Schroeder passed away from this life to his heavenly home at the age of 103 years and two days. He will be dearly missed by his wife of 76 years Ruth, his children Dan (Joan) Schroeder, Wendi (Sieg) Neumann, Susan Chartier (Gilles Buisson), Jack (Debi) Schroeder and Jeannie (Bill) McVicar as well as the apples of his eye, 14 grandchildren: Marla (Tracy), Tanya (Ken), Andrew (Rowena), Trisha (Jeff), Lisa (Yvan), Jocelyne (Aaron), Ryan (Sarah), Tyler (Deryn), Dustin, Travis, Samantha (Bryce), Amanda, Cassandra, Zachary and 10 great grandchildren: Bentley, Ethan, Tate, Cooper, Piper, Otto, Kajus, Henry, Hayes, and Finnley. He was predeceased by all of his siblings, parents and son-in-law Roger Chartier. John was born into a loving family on October 9, 1918 in Rosenthal Russia to Johan and Anna Schroeder, the 11th child of 15. Only 7 children survived due to the unrest and illness in the country. He was the only boy to survive with 6 sisters to dote on him! Fleeing the communist regime, he immigrated with his family to Canada in 1923. They settled in Niverville and Winnipeg before eventually settling in Morris, Manitoba. John moved to Winnipeg to pursue his trade as a machinist and worked for many years at Monarch Machinery and later at Powermatic Industries in Morris. In 1944, he met Ruth Aebig in the revolving doors to The Bay downtown Winnipeg! Her sister introduced them which eventually led to their marriage on April 7, 1945. Their marriage was one of partnership in business and family lasting 76.5 years. Five children were added to the family. In 1948, John and Ruth decided to move back to Morris to take over his father’s small greenhouse business and he expanded it to include a delivery route to many small towns in central Manitoba for 35 years. After surviving two Red River floods, he moved the greenhouses to a property just east of Morris. He had an entrepreneurial spirit which saw him involved in a few other businesses in Morris. Together with two partners he opened up the first motel in Morris named Belair Motel which later became Burke’s and is still in operation today. He also purchased and ran an egg grading station on Main Street. After retirement he continued to enjoy gardening in his small backyard greenhouse as well as making and designing 120 petunia trees which sold far and wide. He set up a small shop behind his garage where he continued to work on his lathe. He loved to travel visiting many countries including his homeland. Music, reading, volunteering at MCC, splitting and hauling wood, visiting his many relatives, telling a good story all filled his busy days. His main focus in life was his faith in God. He was a young man when he decided to follow Jesus. He served well in many capacities in his church first in a small Mennonite Brethren church and then the Emmanuel Baptist Church. He especially had a soft spot for the poor and needy helping where he could. His family was his pride and joy delighting in his many escapades with his sisters, trips with his kids and large family dinners with the grandchildren and great grandchildren. We will miss him dearly but are thankful for his life…a life well lived and loved. Matthew 25:21 “Well done thou good and faithful servant.” A celebration of his life will take place at 2:00pm on Tuesday, October 19, at the Emmanuel Baptist Church in Morris with a private family burial prior to the service. Due to covid restrictions only those who are fully vaccinated may attend the funeral service. Please remember to bring your proof of vaccination. The family wishes to thank the staff of the Red River Valley Lodge for their wonderful love and care of John over the past 5 years. He was so appreciative and thankful for you. In lieu of flowers donations may be made to MCC in his honor, his favorite charity. To watch the live stream of the funeral on Facebook go to the Emmanuel Baptist Church Facebook site: https://fb.me/e/VbnLxVg4