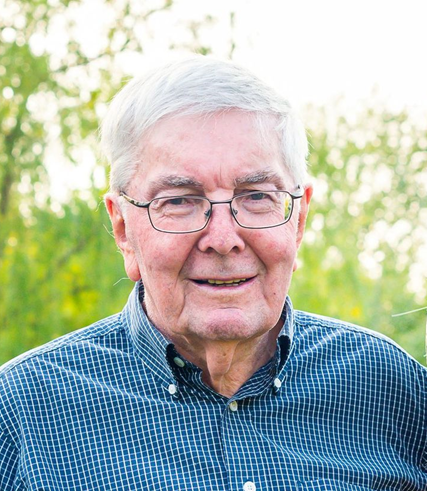 A wonderful man is no longer with us and our lives have been changed forever. Beloved husband, dad, grandpa, brother, uncle and friend, Edward Klassen Kroeker passed away unexpectedly on Friday, September 2, 2022 at Morris General Hospital after a short illness. He is survived by his wife, Annie, four daughters, Jennifer, Elaine, Lavonne and Stephanie and son-in-law, Nathaniel Klassen, and treasured grandchildren, Jonas, Meg and Tobin. He is also mourned by his brothers Menno (Dorothy), Peter (Anne), Ron (Wendy) and Lorne (Helen) and sisters, Elsie (Ernest) and Erna (Hank), and his in-laws (Eva, Bertha), the Reimer family, and many nieces and nephews. Ed was predeceased by his parents, Peter L. and Annie Kroeker, brothers Henry, Willie and Jake, sisters, Mary and Martha and stillborn son, Kevin. Ed was born on his family farm near Rosenort on January 29, 1938, and enjoyed an adventurous life growing up among his large family of brothers and sisters, work and play intertwined. He attended Rosenort School and was sometimes seen with chocolate pudding around his mouth before school started! His love for restoration and creativity started early, making things to play with out of scraps and creating photos of larger than life garden produce on toy trucks before photo shop was a thing. Dad started working at an auto body shop as a teenager, attended Steinbach Bible Institute for a year and followed his brother’s example by going to work in the bush in Ontario. It was during these years that he met Annie Reimer in the church choir and they married on August 13, 1961 in a double wedding with Annie’s twin, Alma, and Ed’s cousin, Andrew. Ed and Annie celebrated 61 years together just a few weeks ago! As a couple, they settled on a farm south of Rosenort and Ed farmed land near home as well as in the Kane/Lowe Farm area. On the side, Ed also continued to hone his auto body skills as Ed’s Auto Body. Some challenging seasons were the loss of their son, Kevin Peter, floods and unpredictable crop conditions. Dad’s faith was evident as he trusted God to provide what was needed and sought to accept God’s plan for him and his family, even when it was not easy. Being raised by Christian parents, Ed chose to accept Jesus’ invitation to be his follower at 14 years of age and was baptized shortly after in what is now Rosenort EMC. He actively used his God-given gifts in multiple ways: camp committee, Sunday School teacher, missions committee, deacon couple, EMC Mission Board, Project Builders, Canadian FoodGrains Bank and in the community as a Rosenort Coop board member and most currently, Morris MCC Thrift Shop volunteer. His wisdom and peace-loving nature were valued by many. His desire was that all this would glorify God and be a witness to His grace. Dad experienced joy when traveling, restoring classic trucks and tractors, walking the Rosenort River Trail, meeting his Jake Horton’s coffee buddies VERY regularly, sharing stories with friends by the fireplace at the Heritage, hiking new trails with his kids and grandkids, biking and reading. Dad was always game for any adventure that his kids conjured up for him and we so appreciated his willingness to help us out with our vehicles and various creative projects. We, his family, brothers, sisters, nieces and nephews, coffee buddies, Riverstone neighbours and countless others will miss him dearly. We are so appreciative of the efforts of the EMS staff, Dr. Fraser, Dr. Loewen and nurse Kasey at the Morris General Hospital and for Corey Wall’s care (Morris Funeral Home). All the kind words, hugs and prayers have been such a gift to us all. His example will shine on. We will deeply miss you till we meet again. The funeral will be held Saturday, September 10, 2022 at 10:30 am at the Rosenort EMC (509 River Road South. Livestream will be available. Lunch at Westfield Arena Park following the service, you are encouraged to bring a lawn chair. A private family burial will take place prior to the funeral service. Public viewing will be held at Morris Funeral Home, Friday, September 9, from 12:00pm to 9:00pm. Wearing a mask at the funeral is encouraged. Donations in memory of Ed Kroeker may be made to the Canadian Food Grains Bank.

Share Your Memory of
Ed
Upload Your Memory View All Memories
Be the first to upload a memory!
Share A Memory