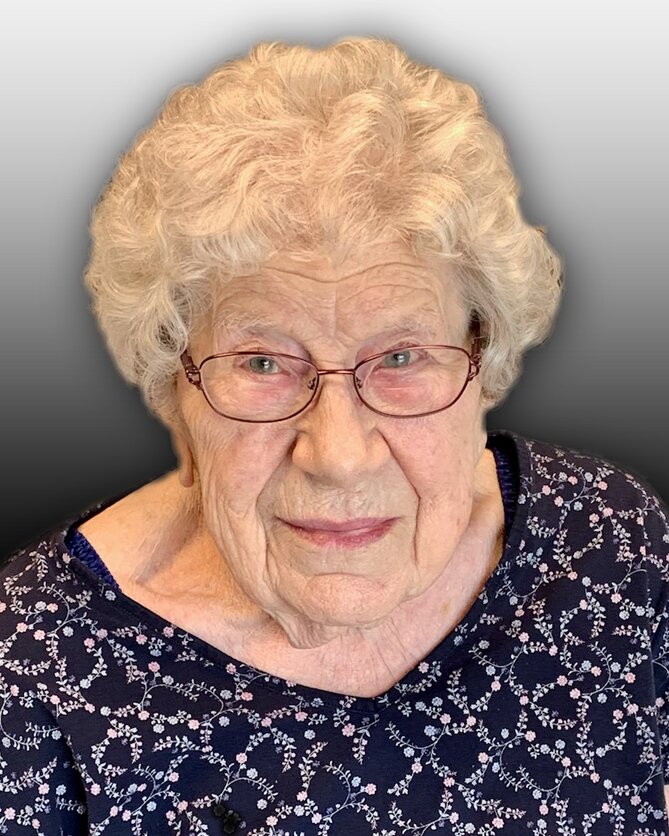 Please share a memory of Mildred to include in a keepsake book for family and friends.
View Tribute Book
Mildred Irene Dickson (nee Loewen) died at rest early on September 12, 2022. Immediate family was able briefly to express love and farewells both at her bedside and, fittingly, by phone. She was born June 14, 1923 in Rosenfeld where her father was the MTS presence. That meant she and her younger siblings became switchboard operators or message takers and deliverers. Her imperative of allowing no more than two rings before answering only faded in her 90s when mobility issues and arthritis in her hands meant taking longer to answer a call. In her final month she still composed hand-written notes in envelopes addressed mostly from memory while regretting the laborious effort it took for her cursive to remain legible. Completing high school in nearby Altona, she enrolled in Normal School but after the summer was asked to take a teaching position in the isolated community of Matheson Island in Lake Winnipeg. WWII had created a teacher shortage but she had experience in giving piano lessons and off she went. By 1943, her family had moved to Morris and told her of an opening at Carleton School 3 miles north of town. Weekends at home meant adding her voice to the Morris United Church choir whereby a long association began. And romance followed with William (Bill) Dickson, a local farm boy whom she married in July of 1948. They raised four children, initially on the farm and later in a home in Morris. Marriage meant the end of her school teaching except for a famous Easter-to-end-of June dash as a fill-in in 1964 in the now-closed Flowery Bank one-room school. She was not retired, however, turning to music lessons(piano, organ and voice) which progressed from her children to cover the greater Morris region. Spring thus meant festival competitions in Dominion City, Gretna and Altona; some of her choirs and soloists took on tougher matchups in Winnipeg and fared almost equally well. It took two (TWO!) retirements for her finally to leave her positions as organist and choir at MUC. Mum (and Dad) offered community service work with, for example, Pioneer Partners at the Stampede; and fraternal organizations (Mum was a 70-year member of the OES). Recreation often meant travel for visits with, and to see family. Long trips in the 50s and 60s and then Expo '67 with their kids put miles on both cars and parents. As the next generation took on the farm, Mildred and Bill often took wing for their farm group tours down under or for Mum's music tours to Europe with her sister. Regular visits to family members across Canada meant having places to stay when the Red River endangered the town; trips south to Texas, east to England or just around the province always included chance meetings with friends new and old - Mum, remarkably, found connections wherever she went. She also connected letters, as on the Scrabble board. Her family all have stories since she loved to play, although by rules which permitted "confirming" the legality of a word before placing her tiles. She remained in the Morris home (that she and Dad built in 1970) after Dad died (they were married 56 years). In 2014, she transitioned to assisted living in Morden and in November of last year to Boyne Lodge in Carman. Each move meant downsizing which she handled with aplomb; and making whole new sets of connections with care givers and staff which was a natural to her as breathing. Cross-word puzzles and reading the obits took up more of her time in Morden and Carman. Working puzzles and writing notes to the recently bereaved (whom she knew from somewhere) became daily tasks, interspersed with learning the genealogies of all her care-givers. If you're going to outlive your friends, you need to know how to make new ones! A celebration of her nearly hundred-year life (she was born June 14, 1923) will be held Monday, Sep 19 at 2pm in Morris United Church. Please join the family to share your stories. A video of the funeral service will be made available below this obituary. Pre-deceased by her parents Jake & Sarah, beloved step-mother Jean, husband Bill, brothers (Don and Gordon), in-laws Pat (Gordon) and Eric (Edith), and one grandson, she is survived by sister Edith, brother Glen, children Bill Jr. (Sharon), Allan (Joy), Elizabeth (Ron) and John, plus eight grandchildren and five great-grandchildren. In lieu of flowers, the family suggest memorial donations be made to one of the following that relate to Mum's life and interests: Red River Valley Palliative Care (Box 519, Morris, R0G 1K0), Valley Regional Library (Box 397, Morris R0G 1K0), Morris District Handivan Service (Box 1191, Morris R0G 1K0), Morris United Church (Box 90, Morris R0G 1K0.). VIDEO OF THE FUNERAL WILL AVAILABLE BELOW

Share Your Memory of
Mildred
Upload Your Memory View All Memories
Be the first to upload a memory!
Share A Memory